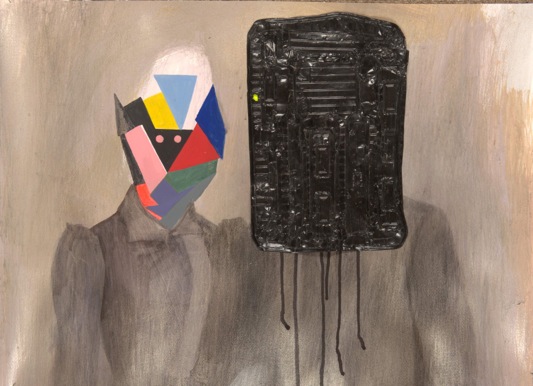 Studies on a Portrait

Sofia Kyriakou’s persistence on most archetypal motif of paintings

Plinius, who dates back to the 1 century AD, was already complaining about the decline in portraiture. He believed that the problem lay in the fact that there was no differentiation in the characteristics  from one portrait to another. However, the quest of copying individual aspects and the result of isolated similarities alienated the great issue of identifying humanity within the portrait. Religious art, such as byzantine icons, but also traditional art by non-western people seemed to have resolved this issue. Plato was clear in this: if an artist manages to create the ideal type of person, he shall be praised by us, and we shall not be interested in discovering his model, given that this shall not exist. It was necessary for us to reach the period of modernity to fundamentally touch on the subject. Picasso’s paintings from cubism and henceforth are a perfect example on how the human form becomes almost unrecognisable, yet portrays the human. The twentieth century comprises of the entire range of facial and bodily deconstruction. With respect to painting, the main thing that modernity destroyed (in order to recompose it) was the human form. Besides, this symbolises the entire construction of western art and its values: harmony, aesthetics, hierarchy, etc.

The pictorial plaque, which depicted two naked people and was loaded onto the Pioneer F spacecraft in order to be sent to outer space, is a good example of the attempt to simplify and shape the human form so that it can take on the required form of communication. It obviously depicts a man and women in such a way that the structural difference in the human species can be distinguished. These forms have (apparently) been simplified and shaped to such a degree that they are absolutely universal. Nevertheless, the portrayal is of a young, white, thin couple, thus eliminating billions of people that do not fall within this category. On the contrary, the borderline simplified images by Fernand Leger, Yannis Gaitis, or Keith Harring manage to do much better as they eliminate any facial, gender or hairgrowth characteristic, thus achieving to cover humanity as a whole. To this end, it could be that a most commemorated (or universal and optimistic) image than the archetypal design of the smile. Furthermore, it seems impossible to think that it can be further simplified and shaped. Could this be the portrait of all portraits?

Sofia Kyriakou touches on the principle of modernity, overlooking any stylistic classifications in order to present a portrait with numerous variations. Whilst her works are wild and furious at times and meet the limits of simplicity and minimal representation on other occasions, they often refer you to masks, whether primitive or futuristic. There are moments where she touches on intangible spirituality –similar to the trace of an elusive ghost that was imprinted on a frame, or on paper, whereas on other instances she persistently focuses on methods of representation. Her works resemble remarks made on all the problems and innovations of 20th century painting. Some of these are indicative of our current situation. Sofia Kyriakou manages to do something rare: she unfolds her studies on the human form, but also on depiction steering clear from any formalism. One would think that each one of her works appears to be by another artist, however in this way she achieves autonomy and freedom escaping from most artists. In doing so, she touches on / approaches the pure essence of creation